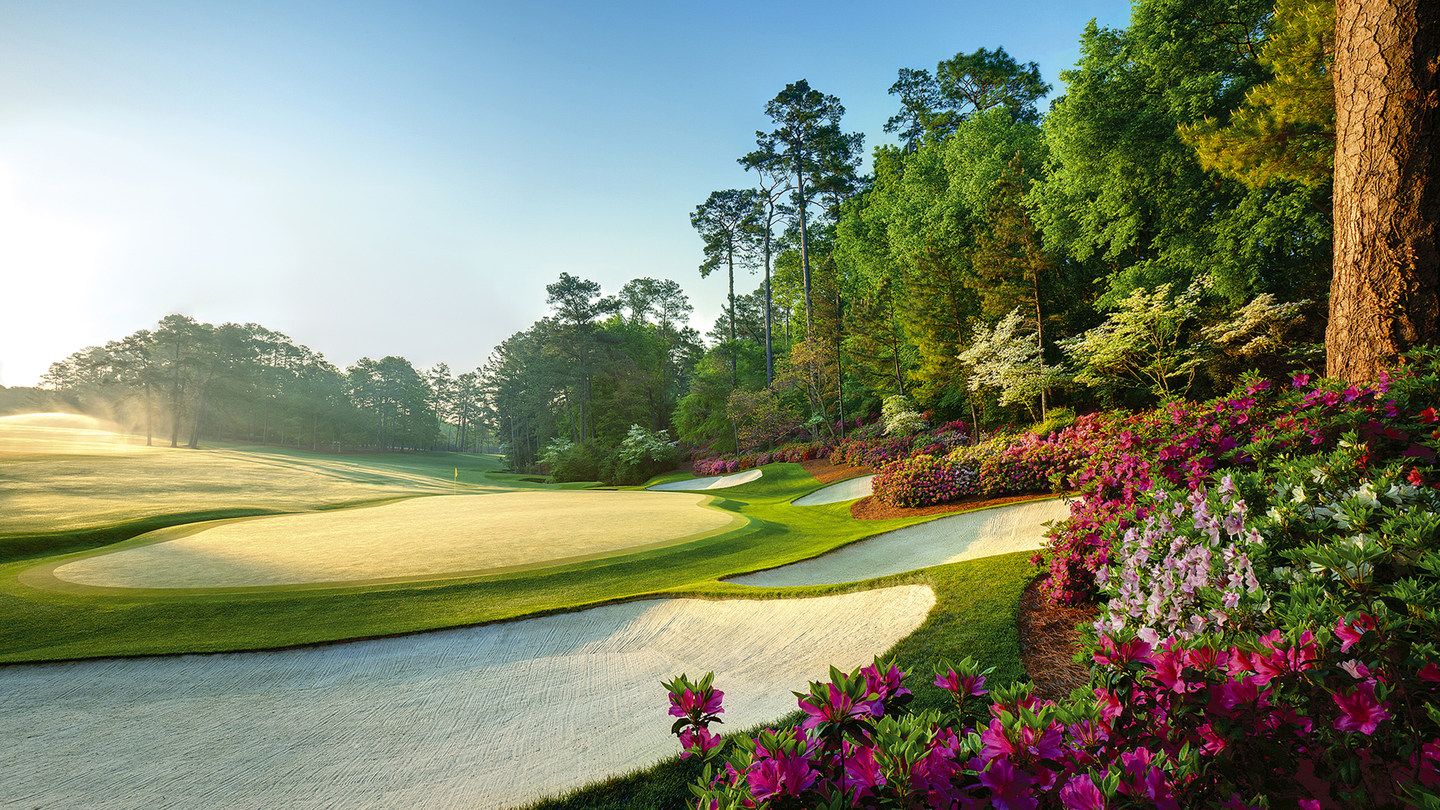 The vibrant natural beauty, the stunningly manicured fairways and greens, the magic and the mystique of Magnolia Lane. A tradition unlike any other, as the saying goes.

And yet if you look just beneath the surface, it’s clear that deep within its DNA, the ancestry of this most American of golf clubs can be traced back to some of the greatest golf courses in the United Kingdom. Unsurprisingly, elements of The Old Course, St Andrews feature heavily. But there are also fleeting glimpses of many more, including Muirfield and North Berwick in East Lothian, Alwoodley in Yorkshire and Stoke Park in Buckinghamshire.

Dr Gary Nelson is a leading authority on Dr Alister MacKenzie – the man who designed Augusta National – and is one of the founding members of the Mackenzie Society. “The Meadow Club was the first course that Mackenzie designed in the United States. He quite openly admitted and identified two holes that he put in – The High Hole from The Old Course, St Andrews, and the Redan at North Berwick, West Links – that were from elsewhere. Neither are exact replicas but there is no question he was heavily influenced by courses he admired. And that he carried them with him.

“The 7th at Cypress Point feels so similar to the 4th at Valley Club,” Gary adds.  “Although there are subtle differences, the holes feel as though they play exactly the same. You see that same repeating of holes at Crystal Downs too. He certainly repeated what he felt were good holes but he was primarily led by the land he had to work with.”

THE MEN WHO MADE AUGUSTA.

Dr Alister MacKenzie lived an extraordinarily full life. This Scotsman, who grew up in Yorkshire, died at the age of 64 having designed 54 golf courses and made alterations and improvements on dozens more. Augusta National, Cypress Point and Royal Melbourne are his most celebrated achievements – all three remain in the world’s top 10 courses .

Mackenzie began his career as a doctor, a physician in fact, and fought in the second Boer War. On returning from the battlefields of South Africa, he briefly resumed his career in medicine before turning his hand to golf course design at Alwoodley in Yorkshire, where he was one of the founding members. Alwoodley remains one of England’s very best inland courses to this day. Wherever he went, and he travelled the globe, Mackenzie found friends and influenced those around him. He was an engaging personality, a man whose presence was felt in every room he entered. He was a wonderful dancer and an enjoyed a drink with friends. He also understood talent and was not afraid to trust it.

Bobby Jones found his calling early in life and was the greatest golfer of his era and arguably any other. Not only was Jones utterly dominant on the golf course, but away from it he boasted movie star good looks and worked as a full-time lawyer having graduated with an English degree from Harvard and an engineering one from Georgia Tech. Jones would retire from competitive golf at the age of 28 having competed in 31 majors, winning 13 of them and finishing in the top 10, 27 times. The pinnacle of his career came in 1930 when he became the first and only golfer to win all four majors in a calendar year. He received a ticker-tape parade through New York City for his achievements.

HOW DID AUGUSTA NATIONAL COME TO BE?

But how did an extraordinary golfer from Atlanta, Georgia meet a surgeon, turned architect from Yorkshire, England? The answer, it seems, is once again St Andrews.

On being presented with the freedom of the auld grey toon, Jones would say, “I could take out my life everything but my experiences here in St Andrews and I would still have had a rich and full life.” That was not his first impression, however. On his first visit to The Home of Golf, a 19-year-old Jones took four shots to get out of Hill Bunker on the 11th, The High Hole, before picking up his ball and withdrawing from The Open. Jones had been the low amateur after the opening 36 holes on day one. After that experience he would say, “I consider St. Andrews among the very worse courses I had ever seen.” His view would, of course, change in time.

MacKenzie was also in St Andrews for The Open in 1921. Both men were back there in 1926 for The Walker Cup, where Mackenzie watched Jones captain the US to victory. A year later both were there again, this time for The Open and it was here they would finally meet for the first time. The Yorkshire Post newspaper would identify MacKenzie in a report about Jones, when the American’s approach to 16th in the final round landed in the rough. “When he hit it, the ball was seen to be going very close to the railway,” it read. “The crowd on that side of the green scattered, and the ball dropped about a yard from the railway fence and on the edge of the rough. Dr Mackenzie, the Leeds golf architect, was within a yard or so, and he stood close to the ball and kept the crowd off it until the men with the red flag got round and rearranged the gallery once again.”

MacKenzie presented Jones with a signed copy of his book ‘Golf Architecture’ following his victory. It was inscribed,  “To Robert T. Jones (Jun), sportsman and greatest golfer – with the author’s compliments. A.D. 1927.” It would become a friendship that would change golf forever and shape the game to this very day.

In 1929, Jones suffered a shock defeat in the first round of the US Amateur at Pebble Beach. The report in The San Francisco Chronicle read, “If an earthquake had suddenly rocked the peninsula, the shock could have hardly been greater.”

With nothing to do, Jones went a few miles up the road to Cypress Point which Mackenzie had completed the year before. He loved it. Marion Hollins, whose force of will had made Cypress Point a reality, saw an opportunity. She may have been an heiress to the fortune of Wall Street tycoon, H.B. Hollins, but Marion did not believe in resting on her laurels.

She was motivated to create her own legacy becoming a national golf champion, an incredible horse rider and a star of the Long Island polo team. And it was Hollins who was the impetus behind Augusta too.

“Mackenzie was up in Canada at the St Charles Country Club, when he got a call from Marion Hollins, saying ‘get back down here. Bobby Jones has played Cypress Point and he loves it,” Dr Nelson adds. “So, Mackenzie gets a train back to California to see Jones. He then walked the course as Jones and Hollins play together in an exhibition match at the opening of Hollins’ latest project Pasatiempo Golf Club, which was designed, of course, by Mackenzie. And we know that some time after that Jones said “I want you to do Augusta.”

THE BLUEPRINT FOR AUGUSTA

What is clear is that both Mackenzie and Jones had a deep-seated passion for The Old Course at St Andrews. Augusta is not a replica of any other golf course. But it does prioritise he need for strategic thought – something that is also by The Old Course, St Andrews. Here is a hole by hole breakdown of Augusta National.

The 4th, 240-yard par 3: Mackenzie wrote that this hole, named Flowering Crabapple, was “very similar to the famous 11th at St Andrews.” The High Hole was a favourite of Mackenzie’s and also the place where Jones disqualified himself from the 1921 Open Championship. The main feature, a central bunker placed just in front of a green, which slopes severely. The tongue on the green was originally designed to receive a running shot into the putting surface.

The 5th, 440-yard par 4: Named Magnolia, the 5th at Augusta has clear parallels with the iconic Road Hole at St Andrews, but in reverse. So rather than the dog-leg being left to right, it swings right to left. The original green had no bunkers – though there is now one at the rear but the real challenge here, as at Road, is the raised green, which almost sits on a plateau.

The 6th, 185-yard par 3: Based on the 15th at North Berwick, West Links – better known as Redan – Juniper, according to Mackenzie, was “much more attractive than its relation.” The Augusta version features a huge mound towards the back right of the green, which the players nicknamed the ‘buried elephant’.

The 7th, 340-yard par 4: Mackenzie and Jones intended this hole, named Pampas, to be their version of the iconic 18th at The Old Course. Originally it had no bunkers and a deep hollow at the front of the green, a homage to the valley of sin. Jones would later say the contouring of the green was too severe and tricky.

The 8th, 500-yard par 5: The green on this hole, named Jasmine, has contours which are skin to the 17th at Muirfield – drawing a well-struck shot into something akin to a punchbowl with high sided hillocks protecting the putting surface. Both holes run slightly right to left but only marginally.

The 10th, 485-yard par 4: The tee represents the highest point on the golf course with the green more than a 100 feet below. This hole, named Camelia, bears a striking resemblance to 4th at Alwoodley, which does not match the topography, does require a tee shot that is shaped right to left and requires an approach to a large green.

The 13th, 480-yard par 5: It is impossible to stand on the 10th tee at Alwoodley, the first course Mackenzie designed, without feeling the clear parallels with his iconic hole at Augusta. The tee shot requires a draw to turn a sharp right to left dog-leg. Both holes feature second shots with hanging lies, both tempt long hitters to dream of an eagle 3, both are exciting risk-and-reward par 5s

The 14th, 425-yard par 4: Chinese Fir, as this hole is know, mirrors the par-4 6th at the Old Course. The clear similarities here are in the putting surface which both feature an approach shot that requires the golfer to negotiate a green with a sharp slope at the front of the putting surface, which then runs away from the golfer and feeds into a Sunday pin.

The 16th, 145-yard par 3: The father of this beautiful hole named Redbud, can be found in leafy England. The 7th at Stoke Park, or Stoke Poges Golf Club as it was known, bears a striking resemblance to the 16th at Augusta, with water in front, protecting a well bunkered green.

The 17th, 400-yard par 4: This hole, named Nandina, is very similar to the 14th at The Old Course but, once again, in reverse. The green slopes sharply away from the golfer. Mackenzie wrote that ‘until players learn to play the desired shot (a running one) this will be one of the most fiercely criticised holes.’