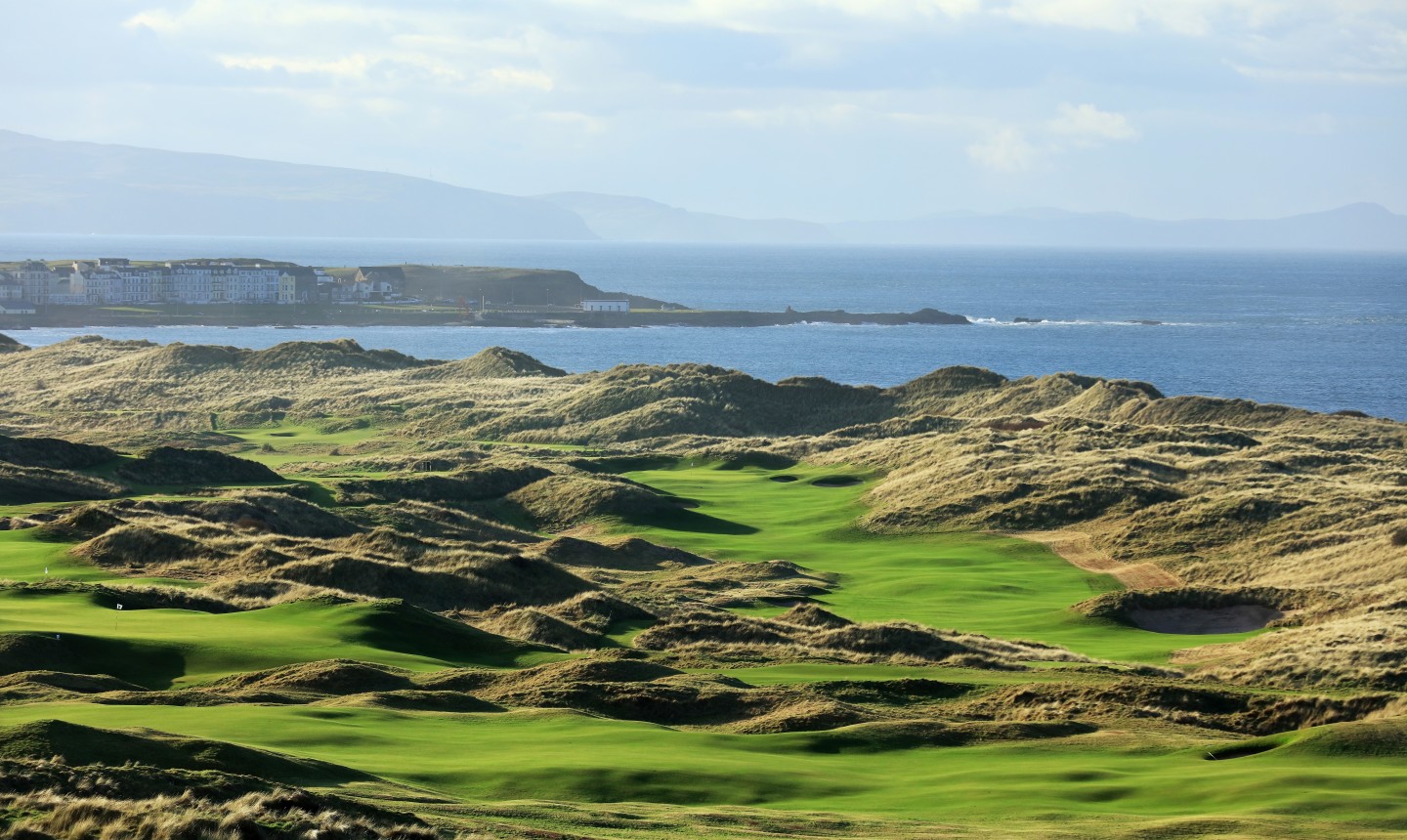 I had planned to hit an iron off the 1st tee on Royal Portrush’s iconic Dunluce links.

But then I caught the eye of the starter. He was shaking his head in disbelief. “How many times are you going to play this course?” he asked with a smile, adding I’d “regret it if I didn’t take it on”.

So I pulled out the driver, hit one down the middle, followed up with a pitching wedge to the elevated green and two-putted from 30 feet for par. If only Rory had had such bold advice!

I had been invited by the R&A to a media day and play a course that is regarded by many as in the top five in the UK, so while there was generally a relaxed air to the round, the promise of prizes and not wanting to look like the 18-handicapper I am, kept me focused.

It was, however, impossible to get McIlroy out of my mind on the opening few holes. His name is synonymous with Royal Portrush’s iconic Dunluce links, having set the course record of 61 at the age of 16 in 2005.

The Northern Irishman had been allowed to become a Portrush member at the age of 8, instead of being made to wait until he was 12 and while two new holes and a raft of other changes were made for The Open in 2019, expectations were high for the champion golfer of 2014 to win the first Claret Jug contested on the course since 1951.

Max Faulkner was the victor almost 70 years ago and this marked only the second time that the oldest of all the majors was to be played outside of England and Scotland.

The seaside town of Portrush had been given a £17m makeover, including a new train station, for the arrival that summer of the world’s best golfers. The 237,000 tickets were sold in record time, guaranteeing that it would be the most attended Championship after St Andrews in the year 2000.

And while local hero McIlroy could not repeat his teenage heroics, a man from the Republic stepped in. Shane Lowry’s ‘new’ course record of 63 paved the way for a memorable victory with scenes not seen at The Open for many a year. It led to then R&A chief executive Martin Slumbers to declare he expected Portrush to remain on the Open rota “for many years”.

But that was all to come.

I had to temper my expectations, while still trying to build on the good start I had made – the mini clenched fist and yelp of celebration at holing a five-foot par putt on the 1st had surprised even myself.

The par-five 2nd takes you further away from the clubhouse, unveiling the majesty of what lies ahead, as you play down towards the coast, via a delightful short 3rd and stunningly tough par-four 4th, with its green half-hidden between sand dunes.

And so to a trio of holes that will stay long in the memory. A risk and reward par four, an exacting par three and a brute of a par five. The 5th is one of Dunluce’s most storied holes. White Rocks is a short dog-leg right par four, all downhill to a green perched 50 feet above the Atlantic Ocean’s waves. It is truly beautiful, even on a dank and overcast spring morning.

As I stop to enjoy the views over to the ruins of Dunluce Castle, after which the course is named, I spy a buggy coming down towards us. BBC Sport commentator Peter Alliss is aboard. He parks up by the bench behind the 6th tee. Great. A tough par-three hole coming up and I’ve got an audience.

The line to the fairway is a little further left than you might think. “Anything right is dead,” said the caddie enlisted by one of our fourball. The rough to the right is not as penal as it will be in July for The Open, so I manage to find my ball and hack it up just short of the green, conscious that anything two yards long is joining the surfers braving the bracing conditions below.

The hole is the perfect example of how Harry Colt used the natural contours of the land to protect his greens. I’m a fraction short with my tee shot to the table-top green and the ball feeds back towards me. There are similar run-offs and swales across the course, negating the need for an over-abundance of bunkers.

The 7th is a beast. At nearly 600 yards, it’s the longest hole on the course and one of the two new holes designed by architect Martin Ebert in preparation for The Open. Five new greens, eight tee boxes and 10 bunkers were added to the layout designed by Colt in 1932.

The cavernous Nellie’s Bunker – a replica of the one that used to dominate the old 17th – tries to suck in your opening shot from an elevated tee, while the towering sand dunes to the right, offer protection from a wind blowing in off the sea. The hole, and the 8th that follows, have been constructed on land taken from Portrush’s sister course The Valley and are therefore settled in their surroundings. And so the round progresses, weaving through the dunes on the triangular plot of land as the sun starts to break through the clouds.

There are wonderful holes throughout; the 10th with it’s semi-blind tee shot, the short downhill 13th  which, unusually for the course, has five bunkers protecting it, the 15th which is named after the Skerries islands you can see in the distance.

And then you hit ‘Calamity Corner’. The 16th is a staggering short hole with the potential to wreck your card. It used to be the 14th but now arrives at what feels like a more pivotal time.

It was 200 yards off the whites and the only bail out is in ‘Locke’s Hollow, named after Bobby Locke who hit all four tee shots front left of the green at the 1951 Open. It’s over a chasm, which falls away to the right and features deep rough if you stray left. “Get up to the Championship tee,” encourages our guide. It plays 236 yards from the tips and offers a genuinely frightening view of the hole.

It’s not that much better from 200 yards. A mighty swish with a three-wood sees my ball land on the front edge of the green. And breathe. The round ends, as it began, with a par and as I pluck my ball from the hole one last time, I pause to take in my surroundings.

I’ve just played one of the outstanding golf courses on the planet and managed to not disgrace myself. It was, as you’d expect four months out from hosting The Open, in immaculate condition. It’s the kind of course that you know is truly special as you’re playing it, but only realise just how brilliant as you relax, with your favourite post-round refreshment, swapping tales of 250-yard drives and missed tiddlers in the wonderful first-floor lounge that affords sensational views across the course.

As the watery late afternoon sunshine gave way to dusk, I couldn’t help but think back to my arrival in the seaside town a little under 24 hours earlier.

It was dark and wild and the rain was coming in sideways off the sea as I dragged my clubs through the front doors of the welcoming Portrush Atlantic Hotel. The sea views it had boasted on its website would have to wait.

The storm had rolled through by morning but there was no time to examine the view. I had an appointment with a golf course that should be at the top of your list to play. I’m happy I did “take it on” as suggested because I had a thoroughly more enjoyable round for having done so. And yes, I did have a ‘snowman’ on my card. But I’ll take that, given the company I’d soon be keeping.

Best par four: The 4th – Fred Daly’s. Out of bounds to the right off the tee, a long second in to a green protected on both sides by dunes and a slippery green. There’s a reason this is stroke index one.

Best par five: The 7th  – Curran’s Point. One of the two new holes put in for The Open. I love an elevated tee but when you’re staring at the enormous Nellie’s Bunker, knowing it’s in reach but you’re not long enough to drive over it…

Stand-out hole: The 5th – White Rocks. It’s quite possibly the perfect golf hole. Take away the sensational scenery for a minute and just think about your options. Take on the dog-leg? Play it safe? Whichever route you take, you know the second is perilous, particularly if the pin is positioned near the back of the green.